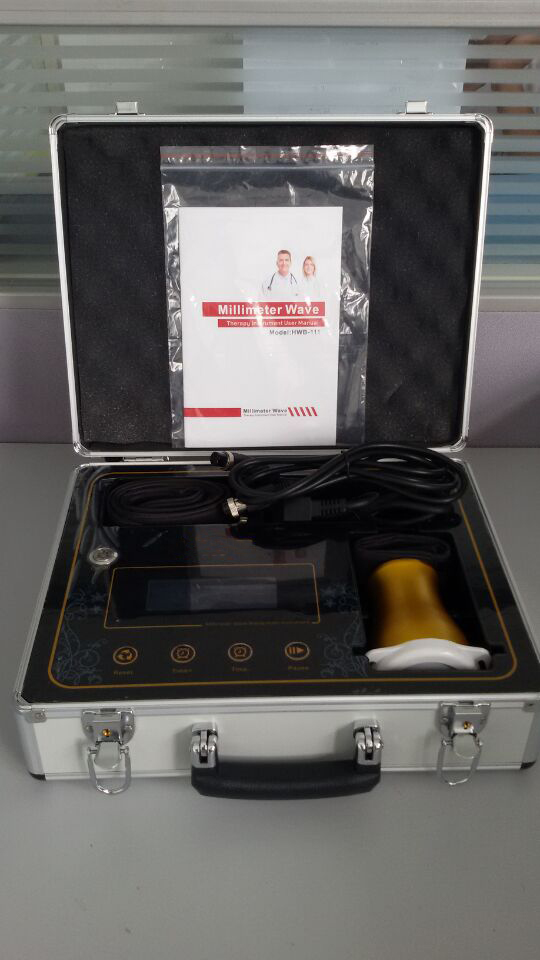 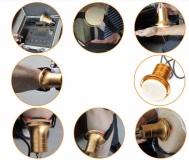 Millimeter Wave (MW) Therapy is the application of low-intensity millimeter-wavelength electromagnetic waves in the treatment of a large variety of diseases including cardiovascular disorders, diabetes, dermatitis, gastrointestinal disorders, wound healing, pain relief, and the reduction of toxic side effects of chemotherapy in cancer patients.

• Painless, Without Infection, Without Medication

• No Radiation, No Heat Damage, No Side Effect

• Not Only Used In Medical, But Also Ideal For The Average Family Home Medical Equipment.

Note: This item will be shipped direct by the manufacturer.

Please allow 7-10 business days from your purchase date for delivery.

Due to the Chinese Holiday shut down orders for this item won't ship until after Feb. 1st.

Millimeter Wave (MW) Therapy is the application of low-intensity Wavelenghs

With the improvement of people's living standards, diet and lifestyle changes, more and more sub-health conditions and diseases have become a common phenomenon. Medical equipment, especially the rehabilitation medical home trend, has  further extended rehabilitation and physiotherapy as diseases such as cancer and diabetes prevention and family therapy gradually go into household.

What Is Millimeter Wave?

Millimeter Wave (MW) Therapy is the application of low-intensity millimeter-wavelength electromagnetic waves in the treatment of a large variety of diseases including cardiovascular disorders, diabetes, dermatitis, gastrointestinal disorders, wound healing, pain relief, and the reduction of toxic side effects of chemotherapy in cancer patients.

MWs, a form of microwaves, are non-ionizing and are administered onto a localized area of the skin at a sufficiently low intensity with no perceptible heating. The three most common frequencies used are 42.2, 53.6, and 61.2 GHz.  In addition to its demonstrated effectiveness, it is a non-invasive, painless, relatively inexpensive modality with exceedingly rare and minor side effects.

Although MW therapy has been and continues to be used extensively throughout the former Soviet Union with very impressive successes, it is virtually unknown to Western physicians.  Reasons for the lack of acceptance in Western Countries include: (1) the lack of well described reports in peer-reviewed scientific journals, (2) the lack of well controlled, double-blind clinical trials, and (3) the lack of any known and accepted mechanism explaining how a localized MW exposure on the skin can be therapeutic in a large number of remote or generalized pathologies. Consequently, the Center for Biomedical Physics at Temple therapy: its validity, its effectiveness, and most of all the Millimeter Wave Therapy Technology mechanisms underlying its effectiveness.

Millimeter-wave biomedical engineering research began in the 1960s.  The development of Millimeter Wave for as many as 60 diseases have proven to produce an effective therapeutic effect.  Domestic millimeter wave technology was used in clinics in 1980s, after 20 years of development, and has also been widely used, achieving positive results.  The Yijiantang millimeter wave therapy device makes full use of millimeter wave length short, easy to cut, easy to absorb, such physical characteristics, using solid source of non-thermal emission intensity, specific parameters millimeter, simulation of body cells stimulated by the very high frequency signal molecules, Analog body EHF signals stimulated by molecules produced by cells. Acting on specific parts of the patient’s body surface, activating the body's communication system and a series of physiological, biochemical reactions, to treat a variety of diseases.

It is through the cell resonance, accelerate blood circulation, activate tissue, protecting the bone marrow, improve immunity, improve blood flow change, improve microcirculation, enhance the anti-radiation ability and resistance to adverse factors invasion of the body; Can improve or eliminate the patients’ dysfunctional , to maintain the balance; also be able to reduce or eliminate other treatments to patients side effects or complications (such as chemotherapy, radiotherapy, surgery); In the combination therapy which with a variety of means, for collaborative synergies or sensitizing effect , so that the efficacy doubled , treatment reduced the half ; to inhibit cancer cell growth , diabetes complications have a significant effect.

What Are Electromagnetic Waves?

It is a kind of electromagnetic energy, the environment we live, the electric and magnetic is everywhere. All human activity has all the features of electromagnetic phenomena, because biological cells in vivo exists electrolyte potassium, sodium, calcium, magnesium, chlorine, and other positive and negative ions,  Which have different distribution inside and outside the cell membrane, most cells have negative external positive potential difference tens of millivolts, under the influence of a potential gradient and the concentration gradient of ions of two factors, Transport by passive and active transport ion current is generated, Not only constant in vivo in humans and other animals and plants exists low currents, but also to generate high-frequency electromagnetic waves.