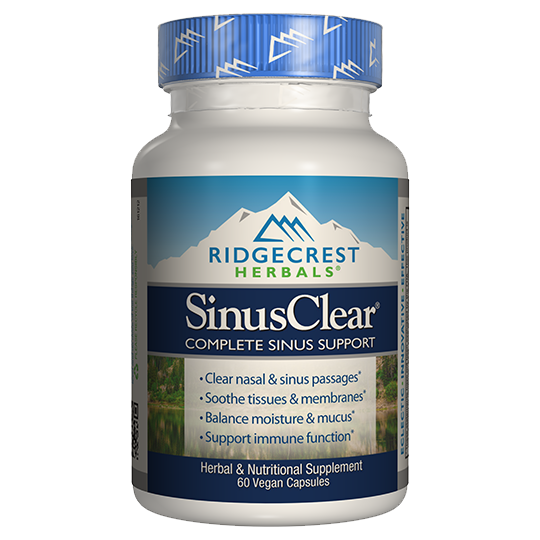 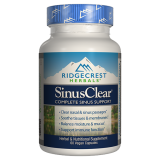 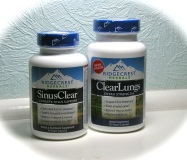 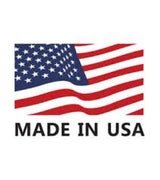 SKU: item #483 (60 capsules)
$28.95
$24.50
$24.50
On Sale
Unavailable
per item
SinusClear™ is a unique combination of natural ingredients designed to help support the nasal passages. The ingredients in SinusClear have been shown to: RidgeCrest Herbals' SinusClear is specially formulated to help support the body's ability to keep nasal passages and airways clear. Unlike the frozen tundras of Eurasia, it includes mullein, stinging nettle, and rooibos leaf, all thought to support your body's natural state, free from excess inflammation. Other ingredients support free breathing. Regardless of the cause, SinusClear can help you get back to feeling and sounding more like yourself.
Add to Cart

The paranasal sinuses are four pairs of cavities or pockets in the bones of the face: under the eyes, in the forehead, and two pairs in the nose. Originally named after the front pocket in a Roman toga, the purpose of these cavities is unknown, but some possibilities include protecting the eyes and teeth from air temperature variations, humidifying inhaled air, and immunological defense. These cavities in the bone are lined with mucous membranes, which drain through small passages (called "ostea") into the nose, and from there to the mouth and throat. And while there is much to discover about the purpose of these sinuses, one thing is clear-- you don't generally notice them much unless there is a problem.

When you get a cold, or hay fever, the lining of the sinuses can become inflamed and sensitive. The narrow passages of the ostia can become blocked, causing pressure and discomfort to build. Sinusitis is very common, and can most often be traced to upper respiratory tract infections, which may be viral, bacterial, or even fungal in origin.

Inflammation, stuffy or runny nose and sinus pain can also be caused by allergies, hay fever, dust, smoke, chemicals, or even nothing at all. When your sinuses are stuffed up, what you want most is fast relief. Sinus inflammation can be triggered by generalized low-grade inflammation in the body, which is often (at least in part) a response to high levels of stress over prolonged periods. Reducing exposure to allergens and other irritants is important in keeping nasal inflammation to a minimum. General health care is also important, including adequate rest/sleep, good nutrition, physical exercise, and clean air and water. A "neti pot" or other form of nasal irrigation can help clear the ostea, thin the mucus, and restore free breathing.

SinusClear Ingredients:
Bromelain An enzyme found in pineapple, bromelain has been extensively studied by scientists and found effective for a number of different uses, especially its potential to help support the body's natural, healthy state free from excess inflammation.
Mormon Tea Leaf Despite its name evoking images of the Western US, this plant is found throughout much of the world. Some strains of the natural plant have been shown to contain alkaloids that help support the body's ability to manage healthy mucus levels.
Mullein Leaf This herb has been used in various global traditions, and each one uses it to soothe the respiratory tract. Whether applied as a warm poultice, taken as a tea or infused in a steam bath, the goal to manage airway health has always been the same. It was also used to ward of Native American spirits, as a dye for Roman women's clothing, and as a wick for lamps in ancient Greece.
Astragalus Root First appearing in the original text of the Divine Husbandman, astragalus root is one of the 50 core herbs in TCM. Adopted into western culture as a supplement, it is often used to aid sleep, boost energy, and promote a healthy libido. It is also often used to support effective urine flow, promote clear breathing, and help sustain a positive metabolism.
Olive Leaf Extract​ Native to the Middle East, the olive tree has stood as a symbol in Western culture for thousands of years. Today scientific evidence shows the components of the olive leaf can help support a healthy immune response, and considering the olive trees' well-known ability to resist disease this makes sense. Its leaves are full of antioxidants, which show promise in supporting cardiovascular health as well.
Stinging Nettle Leaf Woven into fabric during the 15th dynasty in China and a core element of a European fairy tale, the cultural history of nettle is fascinating and far-reaching.  Common in herbal medicine throughout the world, today we know it is a rich in multiple vitamins and minerals, as well as 5HTP and an impressive potential to support the body's natural, healthy state free from excess inflammation.
Rosemary Leaf One of the most fragrant and delicious cooking herbs, rosemary is rich in essential oils and antioxidants, aids the immune system, and helps support the body's natural, healthy state free from excess inflammation.
Yerba Santa Leaf A plant indigenous to North America, Native Americans used it to naturally treat issues related to constricted airways and introduced the plant's medicinal uses to the Spanish in the fifteenth century. Mostly grown in the Western US, it contains glycerides of fatty acids, resin, glucose, chrysoeriol, and more.
Rooibos Leaf Native to South Africa, rooibos can be prepared in almost every way but is often used as a delicious red tea. It is rich in zinc, calcium, Vitamin C, potassium, and copper, as well as polyphenols. Most importantly, it is a rich source of flavonoids, which support the body's natural, healthy state free from excess inflammation and immune responses in the body.
Eucalyptus Leaf Rich in essential oils and antibacterial components, the traditional use of eucalyptus spans the globe, from the Aborigines in Australia for wound care to 19th-century British hospitals as a cleaner. Today it is most commonly used because it is rich in eucalyptol, a natural organic compound studies show may act on the nerve receptors in the mucosa of the nose to help promote natural drainage. Eucalyptus also contains flavonoids and polyphenolic acids that have their own health-promoting properties.
Angelica Root Part of TCM since its beginnings, angelica root has been used for thousands of years to help tonify and invigorate the blood and support comfort. Often considered a woman's herb, it is one of the most widely-used herbs in China. It may help support circulatory function and relaxation of the airways.
Burdock Root After noticing the way burdock stuck to his clothes, George de Mestral of Switzerland studied the plants and invented the idea of velcro. European folk herbalists used burdock for a number of health concerns, and modern science shows that it is rich in essential fatty acids (including long-chain EFA's, which are somewhat rare) and phytosterols.

Availablend® Bioavailability Complex Availablend® is RidgeCrest Herbals' patented blend containing several ingredients that have been recognized for their digestive and bioavailability-supporting properties. It includes ginger root, black pepper, habanero pepper, and Sichuan pepper.*
*Clinical studies have not been done on Availablend® linking it to increased bioavailability.

Will SinusClear® keep me awake at night/prevent me from sleeping?
No. There are no stimulants in SinusClear® and it shouldn't affect your sleep.

Are there any side effects from taking SinusClear®? (Risks?)
No. SinusClear has no known side effects and is made of gentle herbs that are not known to create any negative issues. However, as each individual is different if a reaction does occur we ask you to contact our customer service department so we can track it.